Welcome to our new weekly update!
This weekly features a lot of content, so be ready!

Quite a few people were wondering why we didn't do a weekly last week... Our schedule has been delayed for multiple reasons, one of them being the fact that we were working on new unique mechanics for the network. We also couldn't do the slayer update due to the build team members being quite busy with the beginning of uni!

As many of you know, GamesLabs used to be popular as a mini-game server, and of course also because of our biggest game: Minescape. It's time to go back to our roots to be able to bring more players to our network. This doesn't mean that Minescape is put on halt, we're still heavily working on Minescape so don't worry about that!

As fans of the mario party franchise, we decided to make a board game inspired by the mario party game. What you will be able to experience is only a first glimpse of the finished product, more updates will come every week.

As of right now, 4 players battle on a game board and earn coins/trophies by winning mini-games. Stars can be bought with 30 trophies (or 15 if you land on the star pad). The person with the most amount of stars win the game and earn candies.

We almost made 30 mini-games for this update, sadly we removed one as it wasn't as good as we planned.
We have 29 mini-games that can be played in the board game and party game modes (the party mode is explained further down).
Here is a quick list of our different mini-games:

You may remember some of our old games that we had years ago in there!
One board game lasts around 20 minutes.

All of these games as well as the game board have music! (More information about the music system in the Minescape section).

If you just want to play pure mini-games, this mode is for you. The party mode allows you to play 8 random mini-games in a row. The one with the most wins, obviously, wins.

Our new dungeon is still under construction and is sadly not part of this weekly. But stay tuned for that update!

A lot of you guys have requested a better way to get exploration xp and money. This is what jobs are for!

You can get jobs by talking to the job master. You can find it in most towns.

A job gives exploration xp upon completion. The xp is calculated as following: (Total xp gain of each task) / 2.
A job also gives coins and the amount is calculated as following: Level of task 1 * 50 + ... + Level of task n * 50 = Sum of all task levels * 50
coins.
Having a high level in exploration will give you better jobs! Keep in mind that only possible jobs are proposed, jobs that you can currently do.

You can skip a job by spending 1500 coins by talking to the job master. You can also access your current job by doing /job

And there we go... One of the best feature of this weekly update, in-game music!

We have been looking at different solutions to bring Music to the game. Two options were mainly considered:

The first option is really not something we want to do, especially because it is annoying for most players as it requires you to open something else and breaks the immersion of the game. We want everything happening in Minecraft, on a single client.

The second option is something we can't expand on and something we can't really do due to Minecraft's limitations. A music file can be quite heavy, especially for long tracks. We're talking about a few mega bytes for a track. Minecraft has a maximum limit of 50 mega bytes for the server resourcepacks. Another issue is the fact that loading a big audio file makes the client lag and freeze for a few seconds. This is really something we don't want to do.

The third option is something we can do, like any other server... However, we believe we can do way better. Actually we believe we did way better. Our new music system is something you have never experienced on a non client-modded server.
We've made a new type of music sequencer in Minecraft that requires no mod. It's like an advanced version of note blocks. We've slowly worked on it in the background for weeks to make it as good as possible...

We are using a few mega-bytes of resource-pack size to add all the music instruments we want to use. We're adding more instruments than what Minecraft supports.
Here is the current list of our instruments:

We also added more octaves (music pitch) than what Minecraft supports. We have 6 octaves for most of our instruments.

What makes Minecraft music "too blocky" is the fact that the instrument are based on a tick. We removed this limitation to make the music sound way better.
Some adjustments were made to the tracks we are playing, such as a tempo fit, to fit what Minecraft can handle with a basic PC.

The only limitation we are left with is the fact that Minecraft sometimes don't play all the sounds (it rarely happens) when too many sounds are played. And of course... the fact that an unreliable client <-> server ping will cause some notes to lag.

We've tested it on different connections so overall the experience should be smooth! All our music tracks are played in the note-block sound channel, so don't forget to turn that on!

We've added music tracks to the entirety of Minescape. Each point of interest has unique tracks from Runescape and the in-between areas and the wilderness also have music tracks.

Roam around Minescape with your music on! It is very nice to finally have some music, making exploration even better!

The bugs reported on the platform and Discord have been fixed, here's the list:

As always, we've added more weekly challenges. You can access them under the week 7 tab, in profile/challenges

How do you like this update? Comment down bellow or on our Discord server!
We will be releasing some videos about our games and we are slowly starting the advertisement of the network.

That's all for now! 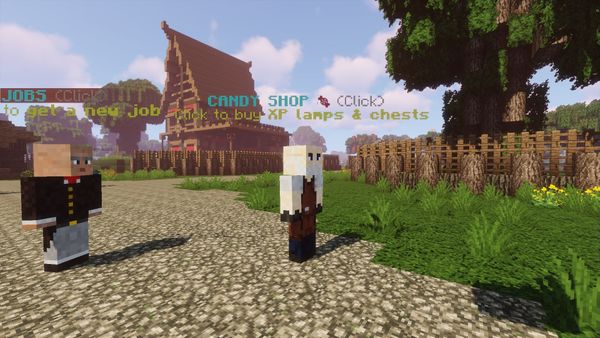 Welcome everyone to this weekly update! This update is mainly focused on candy usage and board games. Board GamesBoard games now has an item shop where you can purchase dice! There are different types of dice: Small dice: 1 to 3Bigger dice: 4 to 6Large dice: 4 to 12Small or big: 1 or 6These dice can be purchased with trophies. We've also doubled the amount of candies you get in board-games and made the game last 25 minutes. This time

Welcome to our new weekly update! We've focused this weekly update on some of the feedback we received (thanks Raymond for your #feedback form) through Discord (#feedback and #polls). This weekly update includes some rebalancing of some skills as well as some new skill content. We've also translated the entirety of the network to french to expand on a new community. Major changesFishing and CookingWe've added 9 new types of fish to rebalance fishing. We've rebalanced low and high tier